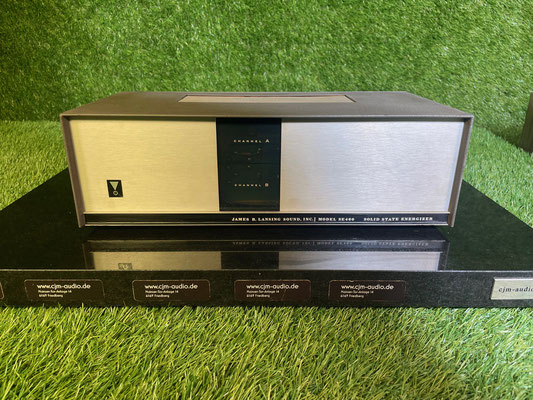 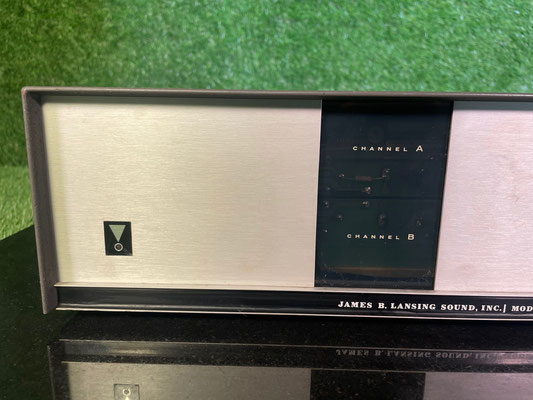 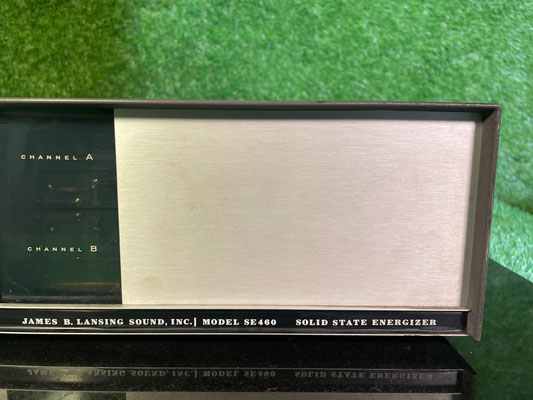 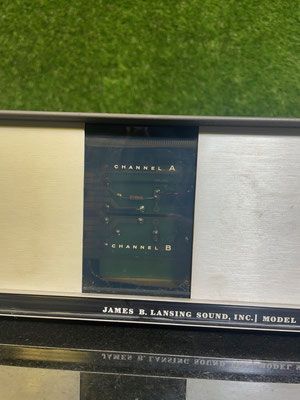 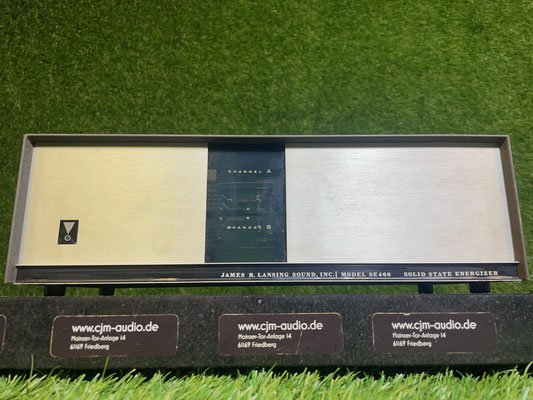 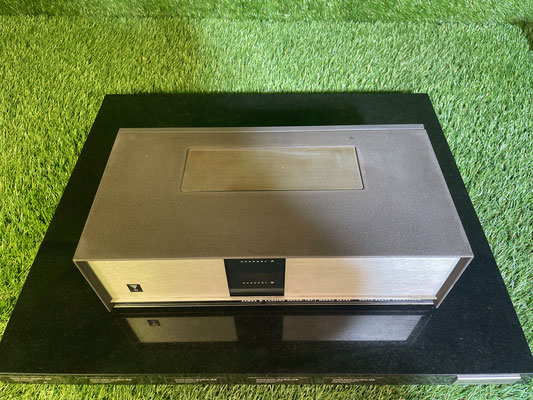 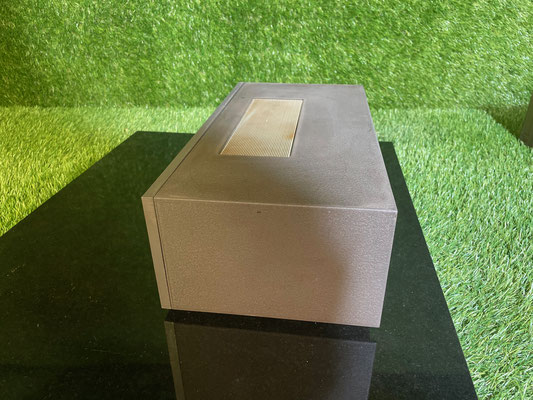 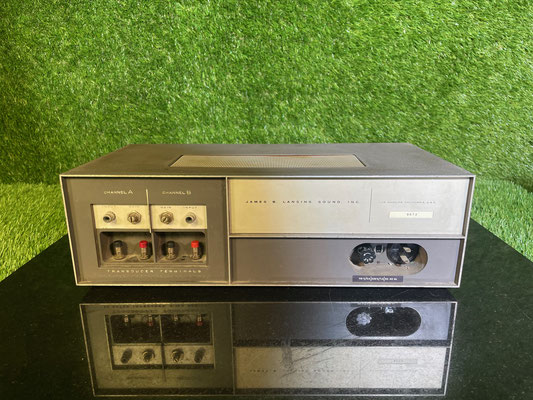 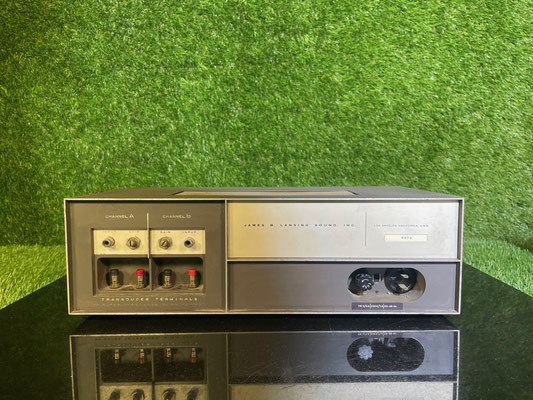 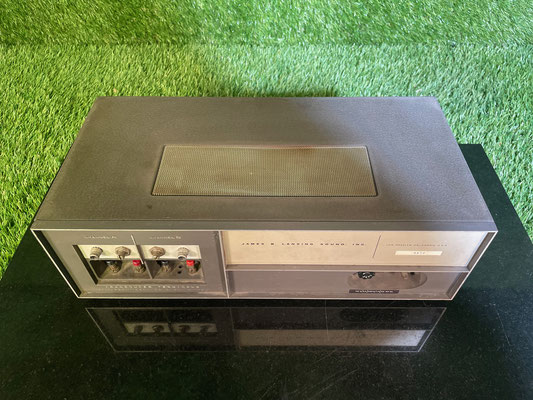 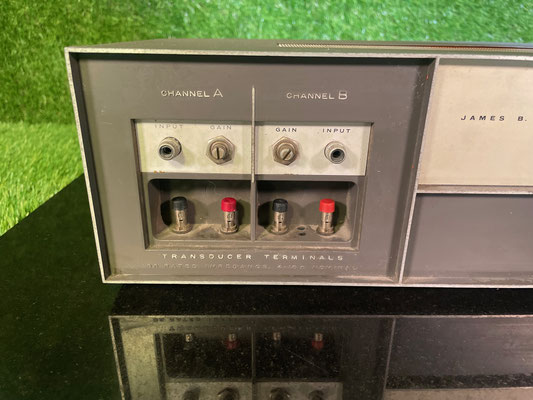 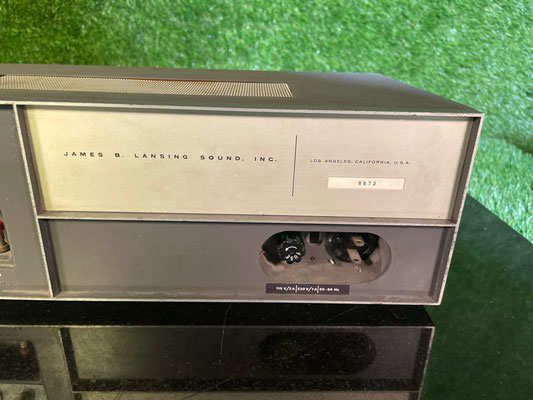 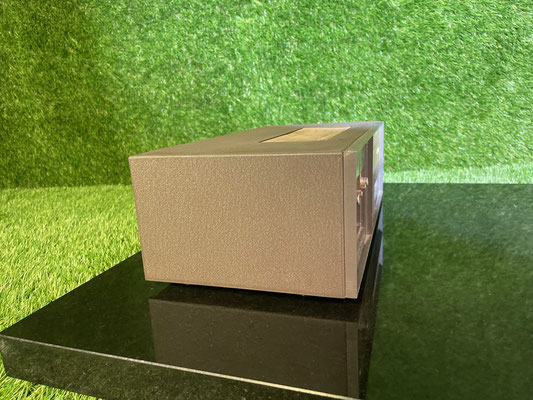 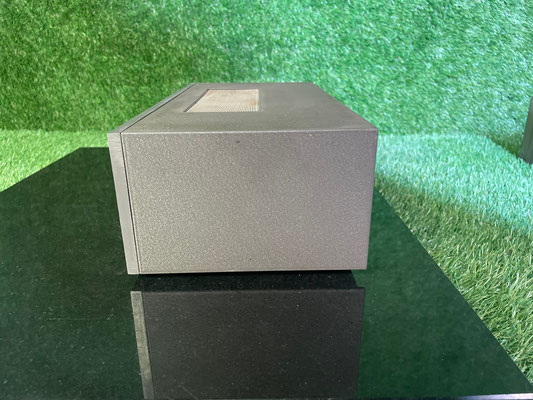 1960s. It was in every sense as groundbreaking as JBL’s

most renowned loudspeakers, but due to marketing issues,

would be short lived.

The consumer electronics line was the inspiration of Bill

Thomas and Ray Pepe. They felt that JBL’s continued

growth was dependent upon expanding beyond their traditional loudspeaker market to encompass electronics as well.

In the 1950s, JBL had established an informal association

with McIntosh whereby each company had used the other’s

products in demonstrations and promotional activities. By

1960, that relationship was foundering as McIntosh sought

to break the perception that their products were tied to any

with the likes of Fisher, Marantz, and, of course, McIntosh.

Pictured above is the first consumer electronics product

that was solely intended to be integrated into the Hartsfield

enclosure. They were unique in that they consisted of two

amplifier sections and an electronic crossover sharing a

develop 40 watts for the low-frequency section and 20 watts

for the high-frequency section.

A number of prototypes were completed in 1960, but the

amplifiers never went into production. The design would be

very expensive to manufacture and the target market, restricted to Hartsfield owners, was considered too small.

There was also a technology issue. The transistor was becoming a viable replacement for output tubes in higher

power applications and it was felt that the PL-100 would

soon be made obsolete. For all of these reasons, management decided to cancel this product and begin development

on a new amplifier that would have a broader market appeal.

The new amplifier was the model SE401, introduced in

1963. It was developed under the direction of Bart Locanthi

output devices. As a result, it was a compact device whose

size belied its 30 watt per channel output. As with the PL100, it was intended to be mounted inside a loudspeaker

enclosure to result in one of the first examples of an integrated, powered loudspeaker. However, where the PL-100

used two separate chassis in a stereo application, the SE401

was a stereo device that would be mounted in one enclosure

of a stereo pair. However, what was truly revolutionary was

loudspeaker it was intended to power. Thus, the SE401 was

While Locanthi was responsible for directing the development of the consumer electronics line, the actual work was a

and his assistant George Noritake. They undertook the detailed design of the components and addressed the difficult

issues of production engineering. One of the unique aspects

of the design was the back plate for the SE401. Since this

amplifier was intended to be mounted inside a loudspeaker

enclosure, heat management would be difficult. They drew

as a combined heat sink and structural support for the attached electronic components. However, with input from

Arnold Wolf, it was also designed to be to the aesthetic

centerpiece of the design, since it would be the only visible

component. Wolf styled this mounting plate with a simple

Bill Thomas also directed the development of a preamplifier that could be partnered with the SE401. He came

up with the concept for the SG520 pre-amplifier which was

unique in its flexibility and ergonomic design. Arnold Wolf

was responsible for detailing the ergonomics in the final

production model and he paid particular attention to human

factors in the selection and layout of the controls. The thennovel use of sliders for variable control was intuitive and

sliders were vertically oriented so that a rising setting corresponded to increased output. Balance was controlled by a

Today, this layout seems obvious, since it has been so

widely copied, but it was pioneering for the times. The push

then nascent computer age. They unashamedly copied the

illuminated plastic push buttons that were widely used on

contemporary computer equipment. Applied to a preamplifier, it proved quite functional, allowing the direct

selection of a desired setting without having to go through

intermediate steps that would be unavoidable with the more

common rotary dials. As with the sliders, the illuminated

buttons provided visual confirmation of the settings. The

SG520 was introduced in 1964 and immediately gained

attention for both its performance and design. It received an

Award of Excellence in the 1965 Western Electronic Show

Paragon before it, was displayed at an exhibition at the Pasadena Art Museum.

to incorporate a new output device of his invention called

the T-Circuit. The analog computer methods he adapted to

design, and he had been experimenting with a new amplifier

topology. Those experiments resulted in the T-Circuit,

which was the very first example of a complementary output

stage for an audio amplifier. It was subsequently widely

copied to become an industry standard in amplifier design.

At the time, it was unique in its minimal use of negative

feedback and ability to handle a wide range of load conditions. It resulted in a series of exceptionally linear, lowdistortion, and stable amplifiers. It was first introduced in

the SA600 integrated amplifier and the updated SE series of

power amplifiers which were designated with an “S” suffix.

Around this time, the first free-standing version of the SE

power amplifiers was introduced as the SE400S. Since this

amplifier would potentially be on display in a user’s setup, it

needed to be visually appealing from all sides. In particular,

there was a desire to highlight the replaceable equalization

cards. Arnold Wolf addressed this requirement with a translucent window on the front of the enclosure that would light

up when powered and illuminate the label of the interior

The consumer electronics line was expanded in 1969 with

the introduction of the higher-power SA660 integrated amplifier, rated at 60 watts per channel. The next year, the 60

along with the ST860 tuner. However, these would be the

last JBL consumer electronic products. Ever since the 1969

takeover of JBL by Harman International, there was pressure by the parent corporation to discontinue this product

line in deference to their sister company, Harman/Kardon’s

products. This pressure was compounded by the fact that the

consumer electronics line was never the profit center it was

hoped to be. It has been speculated that JBL lost as much as

$50 on every electronic component sold. JBL’s thenPresident, Arnold Wolf, resisted this pressure as long as he

could but was ultimately forced to accede in 1971. Thus the