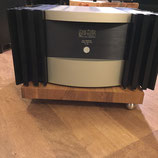 The '331's build quality is superb, better than I've seen in almost all other audio products. If weight, shielding, and size of heatsinks mean anything, then the No.331 should run much longer and more reliably than the No.27, which already has seen five years of steady, unbroken service in my listening room.

Driving the Quad ESL-63s, the No.331 had stiff competition—my well-broken-in No.27 from the same manufacturer. I'd grown accustomed to this amplifier's treble detailing, which brought out the upper range of my Quad ESL-63s. With the No.27 connected to the Quad '63s and the KSA-250 driving the Bag End subwoofers, the overall effect was a natural, sweet, somewhat shallow, but detailed soundstage.

Within a minute after hooking up the new Levinson amplifier to the Quads, any doubts I may have had about how the '331 would fare were put to rest. These initial impressions did not change after hours of listening. The No.331 added new ingredients: greater transparency, greater depth of soundstage, and total neutrality. This made it hard to describe, because the amplifier's sonics were not silvery like the No.27's, nor dark like those of the original Levinson ML-2 or the first No.20s I auditioned in my listening room. Nor did it have the warm midrange of the No.27.5. Determining its character would take much more listening.

Driving either the Quads or Snells, the No.331 produced a wide and deep soundstage, easily the equal of the Krell KSA-250 which used to produce the best soundstage depth in my listening room.. This could be clearly heard on the opening of "Hotel California" on the Eagles' live Hell Freezes Over album (Geffen GEFD-24725). The placement in space of the audience sounds, the acoustic guitars, and the conga drums were all well-defined, giving the impression of a very wide, deep soundstage. The openness and naturalness of the lead vocalist's voice and the great dynamic reserves of the '331, all served to sweep me into the music. Again and again I found myself becoming involved in music that sounded three-dimensional, vibrant, and clear.

I was able to hear a distinct layering of the harp, clarinet, organ, and male and female choirs on Rutter's "The Lord is My Light and My Salvation," the second cut on Reference Recordings' Requiem. The No.331's ability to produce a well-defined soundstage was evident on the LP from the original soundtrack of the motion picture Glory (Virgin 90531-1). The choir spread from wall to wall in the opening cut, "A Call to Arms."

With the No.331 driving the Snell Reference Towers, the midrange was balanced, neutral, and grainless, with none of the forwardness JA had described in his review of the Levinson No.23.5 (Vol.14 No.9). The new Mark Levinson was as smooth in rendering orchestral textures as my well-broken-in No.27. Like the 27, the No.331 delivered a richness of orchestral timbre, especially on woodwinds, that was missing from the Krell KSA-250's presentation.

The No.27 rendered a silvery, sweet quality to cymbals and hi-hats at the finish of Richard Thompson's "Why Must I Plead" (Rumor and Sigh, Capitol CDP 95713 2). The new No.331 played the same selection with more transparency and neutrality. It added clarity and realism to pop vocals, allowing me to hear more of the timbre and harmonics in David Bowie's voice on the Cat People soundtrack (MCA 1498), and Willie Nelson's voice singing "Getting Over You" on his Across the Borderline (Columbia CK 52752) than I had heard before. I particularly enjoyed comparing changes in Don Henley's voice, which was lighter and clearer on the original Hotel California LP (Asylum 7E-1084) than heard on the live CD performance recorded 14 years later, where his voice is rougher, more resonant, and narrower in range.

The No.331 was run in gain-matched comparisons with the Mark Levinson No.27 and Krell KSA-250 amplifiers. The treble response of the Levinson '331 was free of the colorations heard with the other amplifiers. Compared to the KSA-250 and the No.27, the 331 delivered a more neutral, distant-but-layered version of orchestral textures, and recreated the sense of the hall heard during the brass finale of Janácek's Sinfonietta: Finale (Reference RR-65CD, José Serebrier, Czech State Philharmonic). There was no glare or harshness to the trumpets during the peaks, and no congestion or hardness during these orchestral climaxes. Listening to Bruce Yeh's Ebony Concerto (Reference RR-55CD) with the No.331, I was more aware of small treble-range details, such as snares in the drum heads, just behind the clarinet.

The No.331's high-end treble openness remained intact at higher volumes and in my larger listening room, when driving either the Quad panels or the Snell Reference Towers. The acoustic space around the instruments was clearly heard after climaxes, when the sound of cymbals and bells died away during the HDCD-encoded band arrangement of the Chorus Line overture on the Beachcomber album.

To examine the new amplifier's bass response, I used it to drive the massive Snell SUB S-1800 18" bass-reflex subwoofers. The older No.27 amplifier, because its gain exactly matched the new amplifier, drove the Snell Type A Reference towers. For comparison purposes, the same musical selections were played with the (gain-matched) Krell KSA-250 driving the subwoofers.

The No.331 proved to be a formidable bass amplifier. The No.331 sustained the deep thunder of the HDCD-encoded Lay Family Concert Organ and shook the room while playing the John Rutter Anthem "The Lord is My Light and My Salvation" (Joel Martinson, organist; Reference RR-57CD). Besides bass level, the '331 controlled the huge Snell woofer cones well.

These qualities added greatly to the drama in the rewritten opening of the Eagles' "Hotel California" on Hell Freezes Over. A thunderous kick drum, overlaid with conga drums and then some kind of pitched low-bass instrument playing a tonic-dominant line, announces the first appearance of the song's melody: these drums erupted with great power with the No.331-driven subwoofers. The No.331 was able to deliver the most stunning impact from the explosive synthesizer opening of Terry Dorsey's "Ascent" on Time Warp (Erich Kunzel, Cincinnati Pops, Telarc CD-80106) when compared to the No.27, a sign that the new amplifier had generous amounts of bass "slam." It equaled the Krell KSA-250 in capturing the startling, shot-like plucked notes of Abe Laborial's bass, and Randy Edelman's synthesizer during "Something's Wrong," from the soundtrack to My Cousin Vinny (Var;gese Sarabande VSD-5364), with more solidity, weight, and authority than heard with the No.27. The No.331 captured the burning pace generated by the tom-tom strokes and subterranean synthesizer chords on David Bowie's "Putting Out the Fire" cut from Cat People.

The No.331's quickness was also coupled with definition, as heard during comparison with the No.27. Clearly discernible pitch changes in deep bass notes were heard best from the No.331 re-creating Terry Bozzio's drums and Tony Hymas's keyboards on "Behind the Veil" on Jeff Beck's Guitar Shop (Epic EK 44313). The 331 amplifier had excellent bass-range response on sustained deep notes; this was heard clearly on both the Quad/Bag End and the Snell Reference system. But just as important, the amplifier was incredibly dynamic, bringing out the energy and pace in popular music and jazz when driving two very different loudspeaker systems.

The No.331, working as either a midrange-treble or a bass amplifier, was a real tonic for my two very-different speaker systems. The Quad ESL-63s, in particular, really came alive when driven by the new Levinson amplifier. This amplifier's excellent dynamic range and ability to clarify orchestral textures in the upper midrange and treble overcame the Quad's inherent dryness and reticence in this area. The Eagles' "Hotel California," plus the band arrangement of the Chorus Line overture on the HDCD-encoded Beachcomber album (Frederick Fennell, Dallas Wind Symphony, Reference RR-62CD) were totally involving on both loudspeaker systems. I found myself playing these two selections over and over. The thrill, the dynamics, and the electricity were there each time.

This review of the Mark Levinson No.331 suggests that a superb 100Wpc stereo amplifier can be developed through careful refinements introduced over three product generations. The original No.27 had a sweet, smooth midrange and treble, but lacked bass slam. The No.27.5 added low-frequency extension and dynamic range, but had a more forward midrange, less woofer control, and a shallower soundstage, I felt. The No.331 retains all the assets of the earlier amplifiers, but with a less aggressive midrange, deeper apparent soundstage, and much better woofer control.

But the advances are more than evolutionary. The Mark Levinson No.331 has a neutral, grainless midrange that allows it to develop the soundstaging and depth that I found lacking in the No.27.5. As a result, the No.331 is the best-sounding Mark Levinson dual-monaural amplifier I've heard. Its ability to breathe life into loudspeakers in the form of extended, neutral midrange and highs is very good news for Quad ESL-63 lovers. Never have my Quads sounded better. This mix works well for dynamic loudspeaker systems as well, as shown by the No.331's ability to function superbly as either a subwoofer amplifier or as a midrange/tweeter amplifier in the full-range, bi-amplified Snell Type A Reference System.

The No.331's build quality is up to the highest standard found in high-end products today. This amplifier's sonics, superb parts quality, overkill power supply, reduced price compared with its predecessor, and five-year warranty offer its owner lots of value for the money, and bring a Class A recommendation from me. The Mark Levinson No.331 should be auditioned by anyone in the market for a topflight, solid-state, 100Wpc stereo amplifier.